Disappointment in the face of unreasonable optimistic forecasts

The future is unpredictable. The information revolution that began in the 80s with the personal computer, followed in the 90s with the global expansion of the Internet, and continued in the first decade of this century with the smartphones, came as a surprise for many futurists. Half a century ago, all predictions agreed that future computers would be larger. In fact, they became smaller. By 1965, something like Internet seemed a prediction for the next century (see the story by Arthur C. Clarke, Dial F for Frankenstein). Looking back, many of the scientific advances of the twentieth century were surprising. Why then do we insist on making predictions, if they are almost never met?
The March 2016 issue of the Spanish version of the journal Scientific American includes an article entitled Neuroscience: how to avoid disappointment, by Professor Alfredo Marcos, which reviews some of the modern predictions about research on the human brain, which he considers far too optimistic. If these forecasts are not met, as can be expected, the disappointment of the public and the governments that sponsor and fund these scientific efforts could lead to a wave of excessive skepticism. These are a few of his words:
However much we learn about the brain, we must not expect that it will provide us with the immediate healing of all our medical and social ills, from Alzheimer's to violence; much less with the keys to human existence.
Man has a clear tendency to exaggerated optimism, which can only be compared with his equally clear tendency to exacerbated pessimism, as expressed in the early 70s reports of the Club of Rome about The limits to growth.

Half a century ago, the scientific world also abounded on optimistic forecasts that were never fulfilled. I have considered them in other articles on this blog: 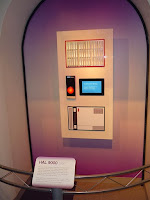 Some of these supposedly immediate predictions never came true. A few (very few) have been fulfilled. In some fields, such as space exploration, it is clear that the expected advances were not achieved: for instance, by 2000 we were supposed to have built colonies on Mars. Just compare what actually happened with the film 2001, A Space Odyssey. Following the success of the Apollo project to put a man on the moon, the subsequent disappointment was evident and led to an almost complete abandonment of space exploration, which was confined to space telescopes, automatic interplanetary capsules, and the space station, a far less ambitious achievement than was foreseen at that time.

But as man is the only animal who stumbles twice on the same stone, we find ourselves flooded by an avalanche of optimistic predictions about immediate scientific advances, covering virtually all fields of science:
Summarizing, in the words of Ray Kurzweil, the singularity is near. Or in those of Nick Bostrom, we are about to reach superintelligence and transhumanism.
All these things are forecast for an extraordinarily immediate future: some for 2030; others, at the latest, by 2050 or 2100. Many people who are alive today should be able to see them. I do not think I am excessively pessimistic if I anticipate that at least 80% of these predictions will not be fulfilled. What will happen when this is evident? Will the subsequent disappointment lead to the collapse of scientific research, at least in some fields? I’m afraid we are running that risk.