A year ago I published an article in which I showed with multiple arguments that man is not just an animal, despite attempts by materialists to reduce us to that level. In fact, many animalists seem to do exactly the opposite: they inadvertently raise the animals to the human level. They do this even with insects, as when they speak of the horror suffered by a caterpillar being devoured by a hymenopter larva, although they reserve their special compassion for the higher animals: birds and mammals.
In their campaign against animal acts in circuses, animalists use the following motto:
A circus is a prison
They usually say the same of zoos, even though modern zoos have little resemblance to those of the early twentieth century, the so-called menageries. 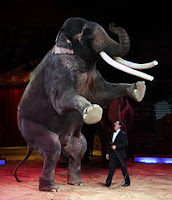 Is this so? Do animals in circuses and zoos feel imprisoned? Or maybe animalists tend to put themselves in the place of the animals, imagine how they would feel and extrapolate their own feelings?
I’m going to tell a story that I consider a pretty powerful proof for the assertion that zoo animals do not feel imprisoned. To do this I will quote the experience of a famous animal lover, Gerald Durrell, who at first collected animals for zoos; then he founded his own zoo on the island of Jersey, which he dedicated to the important task of forming colonies of endangered animals, so preserving a remnant that may serve to keep the species alive; and finally he founded the Fauna and Flora Preservation Society, an organization dedicated to the conservation of endangered species. His character should not be suspect for the strictest animal lovers.
Brother of the famous novelist Lawrence Durrell, the author of The Alexandria Quartet, Gerald Durrell published 26 autobiographical books about his childhood on the island of Corfu (My family and other animals, his most famous work), or narrating his travels in search of animals, his efforts to found the Jersey zoo, and his expeditions to film animal documentaries in exotic places on Earth.
And now, the promised story, taken from the book The drunken forest (1956):
In 1954 Gerald Durrell organized an expedition to Paraguay to collect animals for zoos. After several weeks in the forest of Chaco, he had assembled a good collection, temporarily housed in small cages, when suddenly took place the coup d’état by General Alfredo Stroessner, who was dictator of Paraguay for 35 years. Durrell received notice that the situation in the country made his urgent evacuation advisable, and was promised a small plane to pick him up in the jungle, along with his team, and transfer them to Argentina. Naturally, he could not take the animals he had gathered, except for a handful, the most vulnerable, which would have to travel on the laps of Durrell and his companions.
With great sorrow, because their efforts had come to nothing, Durrell had to give back their freedom to most of his animals. And then the unthinkable happened: the reptiles, it is true, left the camp and entered the forest as fast as they could. Birds and mammals, however, refused to leave. In those few weeks they had become accustomed to the easy life of captivity, and for several days they surrounded the camp and chased everyone who came out, expecting to receive food. It took them several days to get convinced that they would not be given anything, which forced them finally to disperse through the forest in search of their livelihood.


Did Durrell’s animals feel that they were in prison during their captivity, as a human being would have felt in their place, and as the animalists claim? I doubt it.

The same post in Spanish
Thematic Thread on Politics and Economy: Previous Next
Manuel Alfonseca