The scientific mistake in Cube 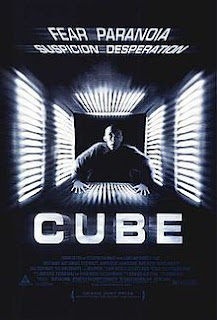 Cube is a horror movie directed by Vincenzo Natali and released in 1997. The film was inspired by an episode of the popular television series of the end fifties and the sixties, The twilight zone. The episode in question, issued on December 15, 1961, was titled Five characters in search of an exit, a title which in turn was inspired by Pirandello’s play Six Characters in Search of an Author. This is the summary of Cube’s plot:
Six persons find themselves inexplicably in an unfamiliar place, consisting of cubic spaces connected together. As they explore, they discover that there are 17,576 spaces, which together form a larger cube, 26 small cubes per side; that each space is numbered with three three-digit numbers; and that some of the cubes (those where at least one of the numbers is prime or a power of a prime) contain deadly traps, while the cubes marked only with composite numbers (the product of different primes) are safe. Before being transferred to the cube (we never learn how) the six characters were engaged in different activities: a policeman, a crook specialized in escapes, a doctor, a math student, an autistic genius and the architect of the cube. The autistic boy has the amazing ability to decompose numbers into their prime factors, which helps them make sure that cells are safe. The math student says that breaking a number into its prime factors is very difficult. In the end, only the autistic boy gets out of the cube alive.

Sometimes, in my classes, I posed my students the following problem:
What is the scientific mistake in Cube?
The mistake is obvious. In fact, it is indicated in bold italics in the summary of the film.

Any math student knows by heart most of these numbers. The others are very easy to calculate mentally.

In conclusion, the math student in Cube should have been able to solve by herself the problem of whether the cells were safe or unsafe, without the need to introduce the autistic genius. This is the scientific mistake in the film.