The hollow Earth in pseudoscience and science

1870 saw the first appearance of a curious variant of the hollow Earth theory outside the literary field. The American Cyrus Read Teed proclaimed his belief that the Earth is hollow, but (here is the difference with previous theories) we live inside. Although the sea surface has been known for over two thousand years to be convex, and in spite of the arguments that led the Greek philosophers to assign the Earth a spherical shape, with ourselves on its outer surface, Teed was convinced that the Earth is really concave. The apparently infinite outer space would be a hollow bubble inside a universe made of rock. Teed changed his name to Koresh and founded a religion (Koreshanity) which reached several thousand followers, although they were scattered after his death in 1908.
Soon after, a German aviator named Bender, a prisoner in France during the First World War, read Teed publications and believed them. Bender developed these theories and asserted that the universe is an infinite mass of rock surrounding a bubble 13,000 kilometers in diameter, in whose inner surface we live. The atmosphere, 60 kilometers thick, thins up to the central vacuum, where three bodies move: the sun, the moon and the ghost universe, a ball of gas with shining points of light: the stars. When the ghost universe passes before the sun, it causes the alternation of day and night in the various regions of the inner surface of the Earth.


In his book Fads and Fallacies in the Name of Science (1952), Martin Gardner says that Bender’s theories were influential in Nazi Germany, where high officials in the Reich and the army believed them. Hitler himself must have given them some credit, because in April 1942, during World War II, he sent a scientific expedition to Rügen Island, in the Baltic Sea, with the mission to send infrared beams skyward and try to detect their reflection on the opposite side of the Earth (the antipodes). The military objective of the project was the detection of the exact position of the English fleet. The expedition was commanded by Dr. Heinz Fisher, an expert in infrared rays, who after the war immigrated in the United States and participated in the investigation of the hydrogen bomb. He once said in an interview: The Nazis made me perform a crazy work.
What does science say about the theories of the hollow Earth? 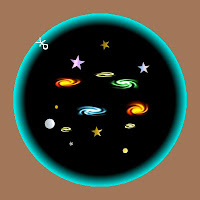 Suppose the Earth were a stationary hollow sphere of constant density surrounding a vacuum. We’ll leave aside for the moment the central sun. According to Newton's theory of gravitation (or Einstein’s, which is no different here), gravity inside the sphere would be zero at all points.
This looks a surprising result. The supporters of the hollow Earth, both in novels and in reality, always assume that those beings living on the inside would be attracted by the ground under their foot, while their heads are directed toward the center. This is not so, because the upper part of the hollow sphere also attracts them. It is true that it is farther away, and the attraction decreases in inverse proportion to the square of the distance, but its mass is much higher than the mass underfoot, and the two effects compensate exactly. The resulting net attraction is zero.
To prove it, one has to resort to integral calculus, but the operations are simple. This result also applies to the electromagnetic attraction, which is governed by Coulomb’s law, analogous to the gravitational law. In this case it can be shown that, in a hollow sphere with uniform electrical charge, the inner electric field is zero at all points.
The people inside a hollow Earth would live in a state of weightlessness. They could fly, move easily from one place to another, but none of the authors of novels or the supporters of a hollow or concave Earth did foresee this state of affairs.
As a side effect of weightlessness, the inside atmosphere would be equally distributed throughout the empty volume. Bender’s 60 kilometers of atmosphere are untenable. And if the amount of air were the same, the atmosphere would be so tenuous that the inhabitants of the inner Earth would be suffocated.
This is what would happen if the hollow Earth were a perfect sphere. Actually it would have mountains and valleys, both inside and outside, but these accidents would be negligible compared to the total mass of the Earth. There would be a small gravity, but it would be almost negligible. A normal human being would not notice it.
If we assume that the hollow Earth rotates on its axis, we must take into account the effect of the centrifugal force. For us, this effect is opposed to gravity. Inside, it would favor the preferred position in the novels: the feet on the surface, the head towards the center. But on the Equator, where it is larger, the intensity of the centrifugal force on the surface of the Earth is three hundred times less than the pull of gravity. 800 kilometers deep, as in Burroughs’s novel, it would be greater, but still negligible. The centrifugal force does not solve the problem.
What if we add the central sun? This would produce an attractive force on the inhabitants of the hollow Earth that would pull them away from the inner surface and fall to the center. The result would be catastrophic. The only way to avoid it would be if the sun had such a small mass, that it were offset by the opposite effect of the centrifugal force, but then we go back to the state of weightlessness.


Of course, the supporters of the hollow or the concave Earth (I don’t know whether there are still any) may argue that the laws of gravitation are false. But this argument is unreasonable and does not deserve to be answered.