Is man just an animal?

Modern biologists frequently say that man is not special, that we are just a species among many. Thus, for instance, Colin Tudge writes this:
Phylogenetically we are an outpost, a tiny figment of life, just as Earth is a cosmological nonentity that no other intelligent life-form in the Universe would bother to put in their celestial maps.
(The variety of life, Oxford University Press, 2000).
This is just the indiscriminate application of a pseudo-scientific dogma that few biologists would dare contradict, which can be expressed in one of the following equivalent ways:
At bottom, what is happening is this: materialist atheism is trying to reduce man to the level of an animal, so as to deny our possible transcendence. This is something that the most important biologists of the middle twentieth century, including atheistic biologists, would not allow.

Julian Huxley wrote:
The gap between man and animals was here reduced not by exaggerating the human qualities of animals, but by minimizing the human qualities of men. (Man stands alone, Harper & Bros., 1941).
George Gaylord Simpson wrote:
[Man] is another species of animal, but not just another animal. He is unique in peculiar and extraordinary significant ways.  (This view of life, Harcourt, Brace & World, 1964).
Theodosius Dobzhansky wrote:
Culture has been achieved in only a single species in the entire living world. And yet by this achievement human evolution has transcended, that is, it has gone beyond the limits of, biological evolution. (Human culture: a moment in evolution, Columbia University Press, 1983).
The truth is, to assert that man is just an animal, as modern atheistic biologists do, one must close our eyes to reality. In this context, about a century ago, Chesterton wrote:
If you leave off looking at books about beasts and men, if you begin to look at beasts and men... the startling thing is not how like man is to the brutes, but how unlike he is. (Orthodoxy, 1908, capítulo IX). 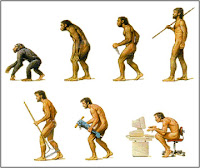 The same post in Spanish
Thematic thread on What Is Man: Preceding Next