In the late nineteenth century, many biologists and thinkers, atheists or agnostics, relied on Darwin's theories to build philosophical schools that combined the newly discovered evolution with the eighteenth-century idea of ​​progress, to assert that the history of life and man shows clear traces of indefinite progress, and to predict that such progress will continue indefinitely into the future.
Among the biologists who ascribed to these theories the best known are T.H. Huxley and Ernest Haeckel. The philosophers were many, each one giving rise to a school of his own, often incompatible with those of others: Karl Marx (Marxism), Herbert Spencer (social Darwinism), Auguste Comte (positivism) and Friedrich Nietzsche (nihilism) were the more influential. In their forecasts for the future of evolution, the last-mentioned was the most exalted and predicted that man would soon be succeeded and supplanted by a superior species, the superman.
In the early twentieth century, Nietzsche’s ideas were adopted by English Fabian Society, whose most prominent members were literary authors rather than philosophers: H.G. Wells and George Bernard Shaw were the most prominent. Wells, in particular, seems to have changed his mind from an initial pessimism, exemplified in his novel The Time Machine (1895) to the almost Nietzschean optimism of The Outline of History (1920). In the meantime, Shaw openly embraced the Nietzsche’s predictions in his play Man and Superman (1903).

The unfounded belief that Darwinian natural selection ensures an indefinite progress in human evolution was denied by believer thinkers like Chesterton (Orthodoxy, 1908, Chapter VII):
Some... talk as if mere passage through time brought some [automatic] superiority... [Others] fall back into sheer submission and stand still. Nature is going to do something someday; nobody knows what, and nobody knows when. We have no reason for acting, and no reason for not acting. If anything happens, it is right: if anything is prevented it was wrong. Again, some people try to anticipate Nature by doing something, by doing anything. Because we may possibly grow wings, they cut off their legs. Yet Nature may be trying to make them centipedes for all they know. Lastly, there [are those] who take whatever it is that they happen to want, and say that that is the ultimate end of evolution. [In a way] these are the only sensible people, [those trying] to work for what they want, and to call THAT evolution...
We need not debate about the mere words evolution or progress: personally I prefer to call it reform... Evolution is a metaphor for mere automatic unrolling. Progress is a metaphor of merely walking along a road - very likely the wrong road. But reform is a metaphor for reasonable and determined men: it means that we see that a certain thing out of shape and we mean to put it into shape. And we know what shape. 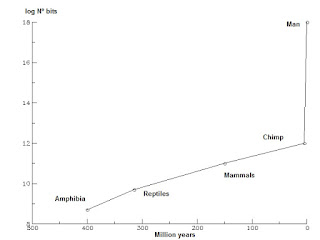 In the late twentieth century, the situation was very different. Biologists had changed sides. Most atheists and agnostics of this profession simply deny that evolution can follow any direction. This statement has become a dogma so incontrovertible, that it makes them blind to all evidence against it, as the fact that the maximum amount of information available to individuals of at least one species has been steadily growing over time during the history of life and has shown a dramatic increase with the appearance of man, as shown in the figure.
Against this, a few philosophical schools still follow the optimistic evolutionary philosophies of a century back. It is enough to quote Nick Bostrom and transhumanism, an updated version of Nietzsche's superman.
In my Prom lecture at the Autonomous University of Madrid (The myth of progress in the evolution of Science, 1998), which resulted in this article, I spoke against the reborn philosophical optimism, analyzing the evidence that suggests that the indefinite progress of science is far from assured. At this point, I align myself with Chesterton. But neither I agree with those biologists who say that man is just an animal, and it is not possible to detect any trends in evolution. For me, the truth is not at one end or the other, but just in the middle.

The same post in Spanish
Thematic thread on What Is Man: Preceding Next