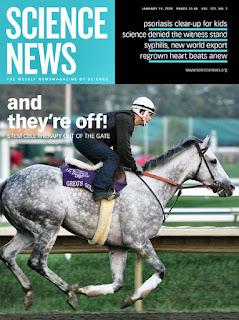 In an earlier post I mentioned that many of scientific news published today are not really new discoveries, but future previsions. What I did was analyze a specific issue of the magazine Science News, and found that just three news, out of 18 it contained, corresponded to concrete findings.
At the suggestion of one of my readers I made a more meaningful analysis, by reviewing, not just a single magazine, but 40, of four different years, to see if the effect stays constant or changes with time. The results were as follows:
It is easy to see that the proportion of articles that make simple forecasts of the future, rather than announcing real scientific findings, seems to be increasing. If in the nineties they were about one in three, in the following decade they grew up to almost one in two.

Writing futuristic articles has the advantage that no one can prove them to be false, something that does not happen in true science, which always is –or should be–  subject to falsification (Popper dixit).
Correction: if someone specifies a date for the fulfillment of the predictions, their falsity can be proven by just waiting until that date and verifying that the prediction has not been fulfilled. Or is this not enough?
The well-known futurist Ray Kurzweil, for example, claims that the accuracy of his predictions approaches 86%. However, some of his supposed achievements are somewhat debatable:
Apart from less important predictions, such as those mentioned above, which may be more or less questionable, the fact is that Kurzweil’s two great predictions (strong artificial intelligence and immortality within our reach) are unlikely to be fulfilled, as I have pointed out in previous posts. But he does not consider them failures, he just delays his predictions. Right now, for example, he says that we should be immortal by 2045, but a few years ago he predicted it by 2035.
In general, I think futurology confirms the famous saying attributed to baseball player Yogi Berra, who died in 2015:


It's tough to make predictions, especially about the future.