The theory of everything 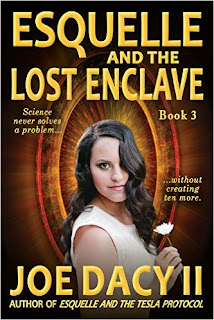 In Joe Dacy’s science fiction novel Esquelle and the lost enclave (2015), which belongs to the hard science fiction genre, skillfully combined with espionage, adventure and political fiction, and covers 1500 years of future history, including the invention of time travel and the manipulation of the past, one can find the following quotation:

Is Joe Dacy II right? Do we think we know a lot, but we know very little? What is this Theory of Everything, with such a grandiose name?
This name has been invented by a few physicists and cheered by the press, on the same line as the name of the God particle applied to the Higgs boson, possibly discovered in 2012. Yes, I say possibly, as it is not certain. Although the particle discovered had the predicted mass and decomposed in some of the predicted particles (not all of them), it has not yet been proved that the Higgs field exists.
What is meant by the name of Theory of Everything is that we know everything about the physical fundamentals of matter, that we do not need God.
Do we really know everything? In the previous mentioned post I enumerated some of the things we do not know about particle physics, about the world of the extremely small. I am giving them here again, reorganized and expanded with what we do not yet know about the part of physics that deals with cosmology, the world of the very big.

1.      The standard theory of particle physics depends at least on 19 independent fundamental constants (the masses of the six quarks, the three leptons and the Higgs boson, plus 9 additional parameters). If it is confirmed that neutrinos have mass, seven more constants would be needed (for a total of 26). Moreover, the standard cosmological theory depends on 6 adjustable and two fixed parameters. To this must be added the fundamental constants of physics (the speed of light, the gravitational constant, Planck's constant, and a few more). In total, our physical theories depend at least on 40 independent parameters. Many physicists think that they are too many.
2.    The standard theory of particle physics explains the existence of mass (in most of the particles that have it) through the Higgs field theory, which predicted the existence of the Higgs boson. However, according to this theory, neutrinos should have no mass. It was later found that all three types of neutrinos can transform into one another, for those detected coming from the sun are only a third of what they should be. The others, presumably, have changed species. This means that neutrinos must have mass, contrary to Higgs theory, although it would be very small.
3.     We do not have a standard theory, but two: quantum mechanics, which applies to the world of the very small, and general relativity, which applies to the world of the very large. Three of the four fundamental interactions (electromagnetic, strong and weak) are handled by quantum mechanics, although their full unification has not been achieved. The fourth (gravitation) is under the study of general relativity, which is incompatible with quantum mechanics. Its corresponding gauge boson (the graviton) has not yet been detected.
4.      We do not have a satisfactory explanation of why the universe is made of matter rather than antimatter. Or, what at first sight seems more reasonable, there should be no matter or antimatter at all.
5.      There is much talk about dark energy and dark matter. It is surmised that the first could be a new fundamental interaction and the second would consist of unknown particles. These particles and that interaction (if they exist, which is not certain) are out of the standard theory of particle physics as it is now.
6.      The standard theory of particle physics predicts that vacuum energy (also called zero point energy, which plays an important role in Joe Dacy‘s novel) must be infinite. As this result cannot be sustained, certain approximations have been devised (gauge theories), that replace absolute by relative values and thus avoid the infinite, but basically this solution only hides the problem. Consequently, the standard theory of particle physics has not been proved to be mathematically consistent.
Do we really know everything? As we see, calling the standard theory of particle physics the Theory of Everything is, at best, somewhat optimistic. I’ll end up with a few more relevant quotations from Joe Dacy’s novel:

They took a beautiful vase, smashed it, named all the pieces, and called it the Theory of Everything.

The 'March of Science' is more like the lurching path of a stumbling drunk.

If I can invent my own mathematics, I can prove or disprove any theory imaginable.

The same post in Spanish
Thematic Thread on Particle Physics: Previous Next