In an article that can be downloaded from the Stanford University website, entitled Are ideas getting harder to find?, the authors raise the following situation:
In many models, economic growth arises from people creating ideas, and the long-run growth rate is the product of two terms: the effective number of researchers and their research productivity. We present a wide range of evidence... showing that research effort is rising substantially while research productivity is declining sharply. A good example is Moore’s Law. The number of researchers required today to achieve the famous doubling every two years of the density of computer chips is more than 18 times larger than the number required in the early 1970s... [W]e find that ideas — and the exponential growth they imply — are getting harder to find. Exponential growth results from large increases in research effort that offset its declining productivity.

As we know, one of the forms of Moore’s law states that the number of transistors on a chip doubles every two years approximately, corresponding to a quasi-exponential growth as shown in this figure. It can be seen that in 47 years the number of transistors has doubled 25.5 times, which corresponds to a doubling every 1.9 years. The figure shows a slight deceleration in growth starting at 2005, but for the time being the law can still be considered valid, at least in this context. In others, such as the acceleration of the clock cycle in microprocessors, the current situation is getting increasingly similar to the logistics curve. 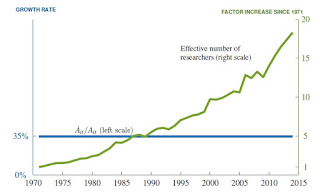 The authors of the article point out that this virtually constant exponential increase in the number of transistors has been got at the cost of a very large increase in research effort, measured as the number of researchers working in the field. The attached figure, taken from the article, provides the proof. The number of researchers has been obtained by dividing the research and development expenditure of about 30 companies that produce semiconductors and equipment, by the average salary of these researchers. The article details thus the worrying conclusions that can be drawn from these data:
The striking fact, shown in Figure 4, is that research effort has risen by a factor of 18 since 1971. This increase occurs while the growth rate of chip density is more or less stable: the constant exponential growth implied by Moore’s Law has been achieved only by a massive increase in the amount of resources devoted to pushing the frontier forward... Put differently, because of declining research productivity, it is around 18 times harder today to generate the exponential growth behind Moore’s Law than it was in 1971.
The authors of the article conclude that Moore’s Law is a self-fulfilling prediction, as its fulfillment has been the research objective for the most important companies in the field during the last 50 years. To do this, they have hired research personnel in exponentially increasing numbers, exactly in the proportion necessary to achieve that objective. But how long can this exponential growth of resources be maintained? 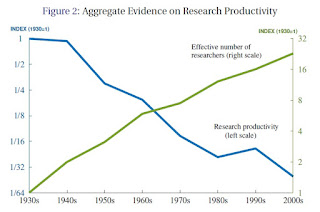 On the other hand, another consequence of the analysis carried out in the article is that productivity per researcher has been decreasing significantly for quite some time, as can be seen in the figure, also taken from the article:
A key assumption of many endogenous growth models is that a constant number of researchers can generate constant exponential growth. We show that this assumption corresponds to the hypothesis that the total factor productivity of the idea production function is constant, and we proceed to measure research productivity in many different contexts. Our robust finding is that research productivity is falling sharply everywhere we look. Taking the U.S. aggregate number as representative, research productivity falls in half every 13 years — ideas are getting harder and harder to find. Put differently, just to sustain constant growth in GDP per person, the U.S. must double the amount of research effort every 13 years to offset the increased difficulty of finding new ideas.
In my next post I’ll comment the conclusions of this article about the increase in life expectancy.