Productivity measures for the increase in life expectancy

In my previous post in this blog I spoke about the article entitled Are ideas getting harder to find? which can be downloaded from the Stanford University website. In this paper, the authors also analyze the increase in life expectancy in the USA and the effort necessary to achieve it, and reach the following results: 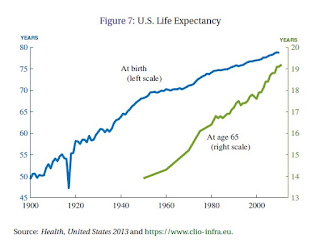 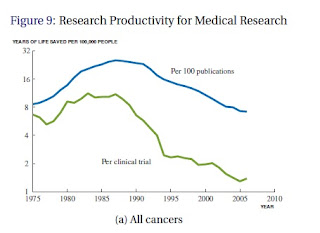 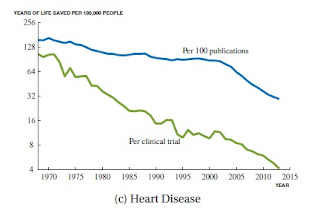 These are the conclusions of the authors of the article:
Between 1985 and 2006, declining research productivity means that the number of years of life saved per 100,000 people in the population by each publication of a clinical trial related to cancer declined from more than 8 years to just over one year... Next, however, notice that the changes were not monotonic if we go back to 1975. Between 1975 and the mid-1980s, research productivity for [the] cancer research categories increased quite substantially. The production function for new ideas is obviously complicated and heterogeneous. These cases suggest that it may get easier to find new ideas at first before getting harder, at least in some areas.
It is clear that the assumption that we are about to achieve immortality thanks to explosive advances in medicine is quite far from reality.