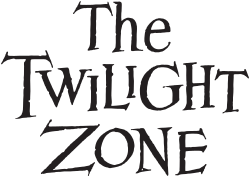 It has been said that the series titled The Twilight Zone was the best TV series of all time. I cannot give my opinion, for I haven’t seen so many series, so I cannot compare them, but this is what I have read.
The series, which ran for five seasons between 1959 and 1964, was dedicated to fantasy, science fiction, psychological horror and the supernatural. It was created and presented by Rod Serling, who also wrote the script of 92 of its 156 episodes. Rod Serling is well known for the scripts of two famous films of the sixties: Seven days in May and Planet of the Apes. The spectacular surprise ending of the second film (which is not in the book on which it is based, Pierre Boulle’s novel of the same title) is at the same level as many episodes of The Twilight Zone.

The series contains plenty of episodes that have left a lasting mark on subsequent cinema and television. I spoke about one of them in another post in this blog. Serling’s scripts are usually characterized by moralizing intentions. Some critics don’t like this, but I do (:-).
As The Twilight Zone is a science fiction series (among other things), we can consider whether it contains scientific mistakes. Of course, a few classic science fiction themes are probably unfeasible, such as time travel or interstellar travel at hyper-relativistic speeds, but they cannot be considered scientific mistakes. In these cases the reader or the audience are expected to lower their level of disbelief, for otherwise the novel or movie would not exist.
The answer to the previous question is affirmative, but it is curious how very few problems there are in the episodes of the series. In fact, in my view they are reduced to a single field of science: astronomy, which seems not to have been a fluent subject for Rod Serling and his collaborators. These are the two main problems I have detected:
Maybe someone explained this to Serling, because in successive seasons he didn’t make the same mistake. In fact, in an episode of the third series, in which two astronauts establish contact with tiny aliens, in the style of Gulliver’s Lilliputians, they no longer speak of asteroids, but of a planet.
The protagonists mention the distance they must travel to reach this planet, where they hope to find peace: 11 million miles (18 million kilometers). Therefore, their planetary system would be located nearer to Earth than Mars. (The minimum distance between these two planets is 56 million kilometers).
As a final detail, which we can consider moralizing, those space travelers, even if they had managed to reach Earth, wouldn’t find here the peace they were looking for. When this episode was released, our civilization was also on the brink of a total nuclear war. Remember that the climax of the cold war was the Cuban missile crisis, which took place in October 1962, while the fourth season of The Twilight Zone was being broadcasted for the first time. Also in this case Rod Serling seems to have learned over time. Thus, in episode 9 of the fifth season, the spacecraft arriving on Earth (if it is Earth, for this is left unclear) comes from a distance of 4.3 light-years (i.e. from Alpha Centaur). The only unscientific detail would be that, at that distance, the astronaut can speak live with his base, without having to wait over four years between sentences, but this is often done by authors of interstellar adventures.