Since the end of the eighteenth century, apocalyptic warnings as regards the unstoppable increase of the world population have followed one another. In 1798, Thomas Robert Malthus published An essay on the principle of population, as it affects the future improvement of society, with remarks on the speculations of Mr. Godwin, M. Condorcet, and other writers. This essay includes the famous quotation:
Assuming then my postulata as granted, I say, that the power of population is indefinitely greater than the power in the earth to produce subsistence for man.
Population, when unchecked, increases in a geometrical ratio. Subsistence increases only in an arithmetical ratio. A slight acquaintance with numbers will shew the immensity of the first power in comparison of the second. 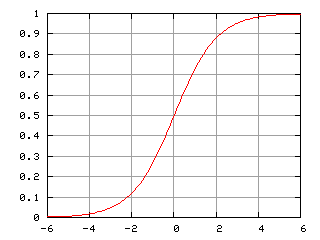 In 1838, as a reaction against Malthus and his alarmism, Pierre François Verhoult asserted in his Note on the law of population growth that this growth is not a geometric progression, but follows a logistic curve (see figure). This curve appears frequently in many natural growth processes.
In spite of this, the first report of the Club of Rome (The limits of growth, 1974) insisted again on an alarmist position by keeping to the previsions of Malthus (an exponential growth) without taking into account the study by Verhoult. In this context, several political and social movements have presented contraceptives and abortion as inevitable measures to save humanity from the disaster of overpopulation.
However, current forecasts are very different. In 2012 the UN published its data about the growth of the world population from 1950-2010, which showed that the growth rate has declined, and that the turning point of the curve (which is looking more and more like the logistic curve) was gone through around 1985. Based on these data, the UN have made several estimates of the future growth of the world population, the most optimistic of which predicts that a maximum of some 8300 million people will be reached by 2050.
Based on these data, and other less detailed covering the period between 1900 and 1950, the authors of this post have approximated the real growth of the world population and its extrapolation till 2050 by the following mathematical expression: 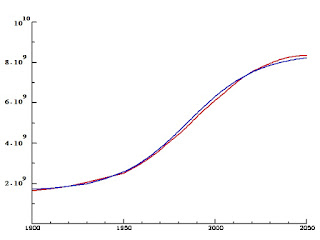 The figure at the left compares the U.N. data (real and predicted, in red) with those generated by the previous equation (in blue). Next we have estimated the development of the world population if anti-natalist policies had not been implemented around the seventies. We have obtained the following results: the turning point would have been delayed until 1990, just five years later. And by 2075 the population would have reached a maximum of 9 billion: 700 million more people, about twenty five years later.
The inevitable conclusion is that anti-natalist policies do not give the expected results. This is now so obvious in China, that it has led them to put an end to their one-child policy. The hundreds of millions of children sacrificed on the altar to Moloch have not been killed to save humanity, but so that we can share a little more for a little longer. It won’t be surprising if posterity accuses us of barbarism for allowing abortion against all scientific evidence, just as we accuse our ancestors for allowing slavery.