What would be an undeniable miracle? 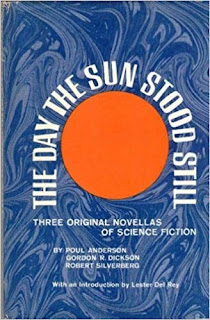 In 1972, sci-fi writer and publisher Lester del Rey launched a challenge to three well-known authors of the genre: Poul Anderson, Robert Silverberg and Gordon R. Dickson. All three should write a novella on a specific topic: the effect of an undeniable miracle (the sun standing still) on human society. The three authors responded to the challenge, and the three stories were published jointly in a book entitled The day the sun stood still. In this post we shall consider the first of the three, written by Poul Anderson, whose title is A chapter of Revelation.
In a post in his blog, Pablo (a.k.a. sinopinionespropias) specifies which, in his opinion, should be the characteristics of an undeniable miracle:
1.      It must be a prophecy.
2.      Its materialization should not depend on people.
3.      Your probability must be negligible and calculable.
4.      It must be as concrete as possible.
5.      It must maintain the same demonstrative force with the passage of time.
6.      It must make sense at all times.
Curiously enough, the miracle described by Poul Anderson possibly fulfills all these conditions. To explain this coincidence, we can consider three possibilities: a) That Anderson had read Pablo’s post (very unlikely, since Anderson wrote his story in 1972 and Pablo published his post in 2018, when Anderson had already died, although we cannot exclude the possibility that there was some time traveling, which was Anderson’s specialty:-). b) That Pablo has read Anderson’s story (he can probably clarify the question). c) That both arrived independently at the same conclusion (this is the most likely option).

This is the miracle described by Anderson. At a time of global insecurity, when the United States and China are about to engage in a global nuclear war because of North Korea, one of the characters in the story publicly suggests that the entire population of the Earth should pray to God at noon in the day of the summer solstice to ask for a sign that will prevent the imminent danger of self-destruction. When someone asks him what kind of sign God could do, he answers: I don’t know, perhaps that the sun should stand still (therefore the first condition is fulfilled). The day in question, while everyone prays (even atheists, just in case), the sun stops abruptly above the zenith of the 180th meridian.
Anderson uses scientific language to describe the situation: the rotation of the Earth suddenly decelerated until its period of rotation became equal to the period of revolution around the sun. This occurs without any of the catastrophic phenomena that should accompany such sudden deceleration (in other words, the principles of conservation of energy and angular momentum are transgressed). A sidereal day later (23 hours, 56 minutes and 4 seconds) the Earth recovers its normal speed of rotation and the sun moves again, continuing its apparent movement through the sky.
I believe that, at first sight at least, Pablo’s six conditions are fulfilled. Although perhaps the question is not as obvious as it seems, as we will see below.
One of the characters in the novel, a young student of theology, gives the best explanation: What has happened was a miracle... an event unexplainable by science, but verifiable by it. And when they ask why God stopped the sun rather than changing the human heart, he answers: Because that would take away our free will, turn us into puppets. I think he would rather give us a fresh chance to make our own salvation.
A few days later, when the initial confusion begins to calm down, atheists, putting their ideology before the facts, try, as usual, to find naturalistic explanations for the phenomenon:
Also some believers try to take advantage of the miracle for their own benefit:
At first, the Great Powers try to maintain the threat to world peace prior to the miracle, but a wave of defections disintegrates their armies, making total nuclear confrontation impossible. However, war does not disappear, and even threatens to result in local nuclear conflicts between Israel and the Palestinians, or between India and Pakistan. The civil social structure also suffers when millions of people leave the cities to go to the countryside.
Let us leave the last word to Poul Anderson. The end of his story is unbeatable:
“Changes are bound to follow a miracle.”
“When will we see that we’ve always lived in a miracle?”
The moral is clear: knowing how humans are, even among the witnesses of a miracle there will always be those who deny it, and a much larger number of people who try to take advantage of it for their own purposes. In other words: an undeniable miracle is probably a contradictory and impossible concept.
Note: Poul Anderson was not a believer, although sometimes he looks like it. His most “religious” works are Three hearts and three lions, Orbit unlimited, and this story we have just reviewed.

The same post in Spanish
Thematic Thread on Science and Atheism: Previous Next