Fred Saberhagen versus the Turing Test

In 1950, the English mathematician and chemist Alan Turing tried to define the conditions so that it would be possible to affirm that a machine is capable of thinking like us. For Turing, this will be achieved when the machine is capable of deceiving human beings, making them think that it is one of them. This test is called the imitation game. I have talked about this in a previous post in this blog.
In 1956, Arthur Samuel of IBM built a program to play the game called draughts or checkers. The program kept information about the moves in the games it had played, which was used to modify its future moves (in other words, it learned). In a few years, after playing many games, the program was able to defeat its creator and played reasonably well in official championships.
That same year, during a summer course held in Dartmouth College, John McCarthy and other computer pioneers coined the term artificial intelligence. Getting their hopes too high, they predicted spectacular advances for the next ten years, which did not take place in the time envisaged, but much later. I have also written about this in another post.
In 1963, science fiction writer Fred Saberhagen published the first story of his famous series about the berserkers, autonomous and intelligent space fortresses created by an ancient extraterrestrial civilization to exterminate intelligent life wherever it appears in the galaxy. This story, titled Without a thought, is an answer to the Turing Test and a brake to the unbridled hopes of the inventors of the term artificial intelligence. This is the plot of the story: 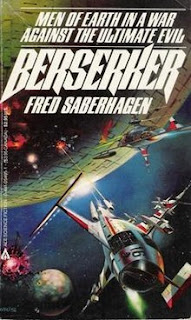 A spaceship manned by a human pilot must face a berserker, who uses mental waves against him to prevent his thinking. To check if these waves are effective, the berserker proposes to play several runs of a game very similar to checkers. Its intention is to discover if it is facing a human being, or a more or less automatic device. That is, the berserker wants to perform the Turing test on the pilot. Aware that, when his mind is affected by the waves, he won’t be able to play, the pilot provides detailed instructions to a genetically manipulated animal that accompanies him on board. As it is not intelligent, the animal is immune to mental waves, but it has the ability to obey orders literally, without understanding what it is doing. The instructions are so good, that the animal manages to play increasingly better games and is successful with the Turing test, which deceives the berserker and makes it believe that it is confronting a human being, and therefore that the Earth ship is not unmanned (which it is), so the berserker does not dare to attack it.
The use by Saberhagen of an improved animal is quite clever. It is evident that this animal represents a computer (an entity capable of executing instructions without understanding them), but the fact that it is not a computer makes the situation clearer. The animal does not learn to play checkers, it simply executes its orders to the letter. But the orders it receives include elements of automatic learning that make it possible to play better and better games against the berserker. The fact that the orders are outside the body of the animal, drawn on paper, and as balls inside boxes, makes the parallel clearer, since we tend to identify the computer with its program, simply because the program is inside the body of the computer (i.e. its hardware).
The use by Saberhagen of a game similar to checkers is significant, as it is an obvious reference to the Arthur Samuel program. The interesting thing about the story is that it makes very clear that the instructions to play checkers, and the learning process that eventually allows the animal to end in a draw all the games played against the berserker, are both parts of the same program, and therefore the merit belongs to the man who designed them, not to the animal, who just obeys orders. The intelligence is in the programmer, not in the executor of the instructions.
In other words: Saberhagen criticizes the Turing Test and shows that it is possible for a computer (or a genetically manipulated animal) to succeed without being intelligent, just because it has been well programmed. Which is obviously true.
We can now see the extremely apt title given by Saberhagen to his story: Without a thought. It means that the animal performs the Turing test successfully without having had a single thought. So the Turing test does not really prove the intelligence of computers, just that of their programmers.

The same post in Spanish
Thematic thread on Natural and Artificial Intelligence: Preceding Next