During the 50s of the twentieth century, the American neurobiologist Roger Sperry performed various investigations on animals, and human epilepsy patients who suffered repeated attacks, intense and persistent. As a solution to these attacks, he used the somewhat drastic (but possibly necessary) technique of cutting the corpus callosum, a bundle of nerve connections that connect the two hemispheres of the brain. The treatment was successful and provided Sperry with a number of subjects with whom he could experience what happens when the two cerebral hemispheres are disconnected from each other.
In his experiments, Sperry proved that the two cerebral hemispheres can act independently. He also discovered that their function is different: the left hemisphere is usually the seat of aggressiveness, logical processes, and the interpretation of written and spoken word. The right hemisphere is responsible for short-term memory, global thinking, artistic activities (as our response to music) and the analysis of spatial relationships. These investigations shed light on diseases and behaviors such as autism, depression, schizophrenia and Alzheimer’s disease. In 1981, Sperry received the Nobel Prize in Physiology and Medicine, shared with David Hubel and Torsten Wiesel for a different research.
For many years, scientists wondered whether there would be two different consciousness in the body of patients with split brain. Some of the experiments lent themselves to this interpretation, and although the matter was not clear, many scientists were inclined to answer the question on the affirmative. As the ability to speak usually corresponds to the left hemisphere, when the patients were asked questions, they could only handle the information available to said hemisphere, which, if it was visual, came in through the right eye. By making the patient write with the left hand, information could be obtained about the right hemisphere, which controls that hand. (The right hand is under the control of the left hemisphere).

In 1965, the science fiction writer Fred Saberhagen published a story entitled What T and I did, whose protagonist has a split brain and as a result his consciousness is also split in two. The narrator (I) is peaceful and calm, has memory problems and trouble speaking. The other inhabitant of his body (T), who is mentioned in the third person, is violent, evil, and threatens to whip his companions. In the end the two consciousness fight each other (each arm is controlled by just one of them) until I manages to dominate T and sends him to the subconscious level.
A recent research seems to have solved the issue. The answer to the question, whether cutting the corpus callosum causes the appearance of two consciousness, seems to be negative. 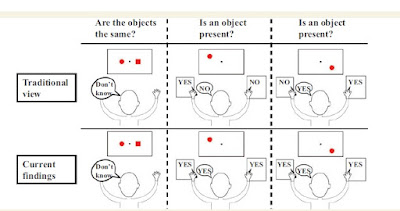 The experiment is quite ingenious and is described by the attached figure. A person with a split brain is shown a screen, in such a way that each eye can see just one half of the screen. If an image is lighted on each side and the subject is asked if both images are equal, the answer is I don’t know, for the split brain cannot compare them.
The second part of the experiment is most interesting. A single object is presented before one of the eyes, but not the other; then the patient is asked whether there is an object on the screen; the answer must be verbal, and at the same time written by both hands. According to the traditional interpretation (that there are two consciousness inside the patient), if the object is on the right visual field, but not the left, the spoken and the written answer by the right hand should be affirmative, for the left hemisphere can perceive directly the presence of the image; but the left hand should write a negative answer, for the left eye and therefore the right hemisphere have not seen anything. If the object were on the left visual field, the answer should be the opposite.
The result of the experiment was surprising. In both cases, the patient wrote with both hands and gave aloud the same answer: that there was an object on the screen. How was that known by the part of the brain that had not seen it? The researchers conclude that this shows that there is just one consciousness inside patients with split brain, which is aware of the presence of the object, even though it can be perceived by just one cerebral hemisphere.
Therefore Saberhagen’s science-fiction story has been surpassed by the advances of science.
I leave it to the reader’s judgment whether the monistic or dualistic interpretation of consciousness is better adapted to this new discovery.

The same post in Spanish
Thematic thread on Natural and Artificial Intelligence: Preceding Next