Is History science or literature?

There are different kinds of sciences. Some are rigorous and have great predictive power, others less, others practically none. Let us look at a classification of the sciences:
·         Formal sciences: They start from axioms or postulates, more or less unassailable, and use deduction as the main method of reasoning. A few play the role of fundamental basis for other sciences. In this group, we can include mathematics, logic and theoretical computer science.
·         Natural sciences: They use induction as the main method of reasoning. Their objective is to discover fundamental laws that explain the working of the world. They rely more or less on logic and mathematics. These sciences include (in order of decreasing rigor) physics and astronomy; chemistry; biology, geology and paleontology.
·         Social Sciences: They use abduction as the main method of reasoning (see an earlier article in this blog). Their object of study is man or society. These sciences include psychology, economics, sociology, anthropology, politics, archeology and history.
·         Finally, the applied sciences, whose objective is to develop practical applications from the theoretical knowledge provided by the experimental and social sciences. They usually associate under the name of technology, although there are some disciplines that fall outside that umbrella, such as legal sciences, applied economics, medicine, or applied psychology.
Apart from the sciences, there are other disciplines usually classified under the name of humanities, a field that includes the study of philosophy, literature, arts, linguistics, and yes, also history, which appears as a bridge between social sciences and the humanities.

History is one of the disciplines most distant from formal sciences. The nearest to a mathematical study of history are historical statistics, which provide data on the evolution of quantifiable variables over time. A book I have written but not published (The quantification of history and the future of the West) is a further attempt in this direction. 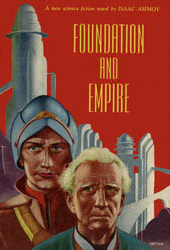 In science fiction, the use of mathematical methods in history has sometimes been touched upon. Thus, in the initial trilogy of the Foundation, Isaac Asimov invented the term psychohistory to refer to a science, a mixture of mathematics, history and sociology, which would be able to make reliable predictions about the future of societies. While explaining how psychohistory would work, Asimov recognizes that the behavior of individual human beings is not predictable, but asserts that the behavior of large social masses (countries, planetary societies or galactic empires) is usually predictable. To illustrate his claims, Asimov unbalances and alters the history of the Foundation, as predicted by Seldon (the founder of psychohistory), by the emergence of a unique and unpredictable personality (the Mule) in the second part of the second volume, for me the best of the trilogy.

In addition to science fiction, there are two other genres of novel closely related to history:
·         Historical novel: within the framework of real historical events, fictitious characters are introduced and historical data (always full of gaps) are completed with others provided by the author’s imagination. My favorite example of this genre is War and Peace, by Leo Tolstoy. As shown by this example, a historical novel can be perfectly true to what actually happened (in this case, the invasion of Russia by Napoleon, along with its historical background), while being an excellent novel.
·         Uchrony or alternate history poses the following situation: what would have happened if such historical event had not taken place, or had taken place in another way? This literary genre does not, in fact, have anything to do with serious history and must be considered purely imaginative, as it is based on what in logic is called a counterfactual, an event that has not occurred, but could have happened, and so is part of a possible universe.
Unfortunately, history as a discipline makes frequent use of counterfactuals, which should only be used in creative literature. If this happens, what should be a serious historical study becomes an exercise in literary uchrony. Let us look at an example:
The expulsion of the Jews from Spain in 1492 by order of the Catholic Monarchs has often been presented as a far cause of the decline of the Spanish Empire. Although this theory is discredited among today’s serious historians, there was a time when everyone took it for granted, even though it is an exercise in alternative history: “what would have happened if the Jews had not been expelled from Spain?” Even now, many non-professionals are still convinced of its truth.
It is curious that this theory seems to have been raised only in relation to Spain, never in relation to other countries that also carried out mass expulsions of Jews. Let us look at a few (data from Wikipedia):
As far as I know, no pseudo-historical alternative histories have been built on any of the expulsions, except for Spain. It would be interesting to consider why.
The problem, in my view, is that history is a discipline far removed from science and too influenced by ideological tendencies. Many historians, among them famous figures from all times, did not really make history, but just tried to justify their own ideology.
The same post in Spanish
Thematic Thread on Science and History: Previous Next