Mistakes in popular science in the media: Stephen Hawking didn’t discover everything

Stephen Hawking has been in the last decades a scientific icon for the media. His painful personal situation turned him into a celebrity who inevitably attracts attention. Therefore, the media have a tendency to exaggerate his scientific work, attributing to him achievements that weren’t his, which he would be the first to repudiate, if he were still among us.
For example, on the occasion of his death, the following headlines appeared in several media:
•         AlDiaNews.com: Stephen Hawking, author of the Big Bang theory dies at 76
•         ElTiempoHoy: Creador de la teoría del Big Bang y los agujeros negros: fallece Stephen Hawking a los 76 años. (Creator of Big Bang’s theory and black hole theory: Stephen Hawking dies at 76).
•         Gizmodo Univisión: Del Big Bang a la Teoría del Todo: el increíble legado científico de Stephen Hawking (From the Big Bang to the Theory of Everything: Stephen Hawking’s incredible legacy).
Stephen Hawking could hardly be the creator of the Big Bang theory, which was first proposed by Georges Lemaître in 1931, more than ten years before Hawking was born. In 1948, when Hawking was 6 years old, George Gamow, Ralph Alpher and Robert Herman predicted that, if the Big Bang theory were correct, there should be a cosmic background radiation, and the average composition of the matter in the universe would be 75 % hydrogen and 25% helium. Both predictions were confirmed in the 1960s, before Hawking turned his attention to this theory. 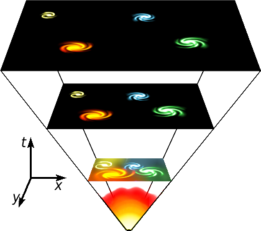 What Hawking did in 1970 (together with Roger Penrose), was formulating singularity theorems that prove that Einstein’s equations are only compatible with universes which include at least one singularity (a point of infinite density). In our case, that singularity would be the Big Bang. But Hawking, of course, was not the author of the Big Bang theory.
Hawking did not create the theory of black holes, as the second headline asserts. In fact, the existence of black holes was proposed in 1916 by Karl Schwarzschild, based on Einstein’s theory. The theory applicable to these mysterious objects was developed during the sixties. Stephen Hawking’s participation took place in 1974, when he proposed that black holes might not be so black, since a Hawking radiation could escape them as a result of the application of quantum mechanics in the vicinity of the black hole’s event horizon. Again, the media have turned a particular advance into the original discovery, which was made long before Hawking was born.
The last straw is that he is also attributed the theory of everything, as in the third headline. The theory of everything is an imaginative (unreal) name given by some physicists to the standard theory of particle physics. I have talked about it in another post. Since Hawking never worked on this standard theory, ascribing him its creation seems excessive.
Recently, a posthumous article published by Stephen Hawking with Thomas Hertog has been published. Once again the media have launched headlines as delirious as the following:
•         The Telegraph: Stephen Hawking’s ‘breathtaking’ final multiverse theory completed two weeks before he died.
•         UPI: Stephen Hawking’s last paper predicts parallel universes.
•         La Vanguardia (Barcelona): Stephen Hawking y su teoría: No vivimos en un universo infinito. (Stephen Hawking and his theory: we don’t live in an infinite universe).
What is the truth in regard to Hawking’s last article? There is a cosmological theory (the inflationary universe), first proposed by Alan Guth in 1979, and modified in the nineties by Andrei Linde, Paul Steinhard and other authors. There are several different versions of this theory. One of them proposes that the universe began, not in the Big Bang, but in a state that has been given the name of eternal inflation, from which our universe would have passed at a certain moment (which we should consider as the origin of time) to a state of slower cosmic expansion, where we find ourselves now. According to this theory, other regions of eternal inflation could have passed to the same state as ours (or to a similar one), so in truth there would be a multiverse, several universes independent of each other and with different properties. This theory, which has not been scientifically proven, could be unified with string theory or M theory, which also comes from the nineties.
What was Hawking and Hertog’s contribution in their last article? They have modified slightly the inflation theory to simplify the passage from eternal inflation to the expanding universe. As a consequence of their analysis, they propose that the number of universes of the inflationary multiverse must be much smaller than previously believed (it was never asserted that it was infinite). This is, therefore, an adjustment to an existing theory.
But of course, some media, which never have a clue about scientific questions, have been announcing that Hawking is the author of the theory of the multiverse (they call it parallel universes) and of the theory of eternal inflation. As usual, Stephen Hawking, whether he likes it or not, seems to have discovered everything.

The same post in Spanish
Thematic Thread on Popularization of Science: Previous Next