The Game of Life and the multiverse

As I said in the previous post in this blog, The Game of Life is a cellular automaton devised by John Conway. Let's see how it works, in a little more detail: 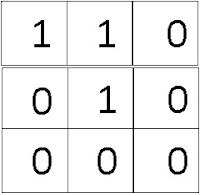 The program in the center box is in state 1. As two of its eight neighbors are in state 1, the next instant it will continue to be in state 1 (i.e. alive).
It is usual to represent those squares whose associated program is alive (in state 1) by filling the square in black and leaving white the squares in the dead state (0), or vice versa: using black for dead squares and white for those alive.
It seems quite simple, but these rules give rise to very complex behaviors. Let’s see, for example, a disposition called a glider, because it moves over time, keeping its structure constant.

It can be seen in the figure (where the dead squares are empty) that, after four steps, the combination of zeros and ones that make up the glider has moved diagonally one position down and to the right, recovering its initial shape. If it does not find on its way other alive cells that could modify its behavior, the diagonal movement would continue indefinitely (remember that the grid is potentially infinite).

Another interesting combination is the one shown on the left, which is called the glider gun. After a certain number of steps, the initial arrangement repeats itself, but a glider has come off it and thereafter moves away indefinitely. After another identical set of steps, a new glider appears, following the steps of the first.
By combining two glider guns in various ways, an OR gate can be built (a device that, when impacted by one or two gliders at the same time, generates one output glider if any one of its two input gliders is present); or an AND gate (gliders come out only if both input gliders are present); or a NOT gate (a glider comes out if, and only if the arriving glider is not present). We know that with these three logic gates (OR, AND, NOT) one can build a computer. Therefore, in the grid of the game of life, it is potentially possible (although hardly feasible) to build a computer, capable of solving the same problems as the computer on your table.
This is just a sample of the amazingly complex structures that can be assembled with The Game of Life.
How did Soler and I prove that Tegmark's multiverse doesn't solve the fine-tuning problem?
The Swedish-American mathematician Max Tegmark invented the mathematical multiverse, which is based on the claim that every mathematically coherent structure must exists physically in some universe. In other words, there are an infinite number of universes, as the number of coherent mathematical structures is infinite. Tegmark argues that in this multiverse there would be no fine-tuning problem: as there are infinite universes, some of them must be compatible with our existence and that’s where we are. Then he adds an additional condition that makes it possible to test his theory: the universe where we are must be the most probable among all those compatible with our existence, for otherwise the fine-tuning problem would arise again.
To prove that Tegmark’s multiverse does not solve the fine-tuning problem, Soler and I put forward the following argumentation:
Note that, unlike other multiverses, Tegmark's multiverse lets us experiment with other universes (The Game of Life is one of them). Therefore, it is possible to reach reasonable conclusions, such as that this multiverse does not solve the problem of fine tuning.
For further details, see our paper Fine tuning explained? Multiverses and cellular automata. F.J. Soler Gil, M. Alfonseca. Journal for General Philosophy of Science, Springer, March 2013. DOI: 10.1007/s10838-013-9215-7.
The same post in Spanish
Thematic Thread on Multiverse and Fine Tuning: Previous Next
Thematic Thread on Synthetic and Artificial Life: Previous Next