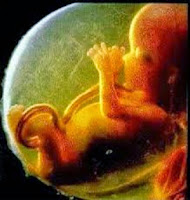 The history of the evolution of scientific theories about embryonic life (the origin of living beings) is very curious. I will try to summarize it in a couple of posts.
Throughout the history of science, the problem of the embryonic development of multicellular organisms has been one of the most arcane mysteries that man has tried to solve. Faced with this problem, two conflicting solutions have essentially been proposed:
•         Preformation: During embryonic development there is just a growth of the pre-formed embryo, whose constitution and composition are completely ready-made from its origin. Everything is done from the beginning, whether in the egg, the sperm or the zygote.
•         Epigenesis: Embryonic development is a process. Not everything is decided from the beginning; everything happens because something - a vital force, or an external or internal action - forces the embryo to develop in one way, rather than another.


The dilemma is very old. Aristotle (4th century BCE) decided to apply the empirical method to solve the question. To do this, he incubated 21 chicken eggs, and every day opened one of them and studied the state of the embryo. Naturally, he had to do this study with his unaided eye, as in his time there were no microscopes. In any case, what he discovered led him to exclude the possibility of a preformed embryo, as certain organs (such as the heart or the liver) did not appear until relatively advanced stages of development, and in earlier stages he couldn’t find traces of those organs. Consequently, Aristotle was inclined to adopt a theory based on epigenesis, although he never used that word, of Greek origin, which means literally after the beginning.
In the 11th century, when the works of Aristotle were rediscovered in the West, it was to be expected that his acceptance of epigenesis would also influenced the physicians and naturalists of the time. Thus, in the early seventeenth century, the English physician William Harvey, best known for his discovery of blood circulation, still maintained a theory based on epigenesis to explain embryonic development. But shortly thereafter a general reaction against Aristotle arose in the West, based essentially on the new cosmological ideas, which led to a 180-degree turn at the end of that century, when scientists decidedly leant towards the theory of preformation.
But by then preformation was not a single theory, there were several, according to two possible points of discrepancy:
•         On the one hand, a part of the defenders of the theory of preformation argued that the structure of the new being was contained from the beginning in the generative cells, in the form of a small fully formed individual that was only waiting to develop. This was the theory of the homunculus if they were speaking of human beings, or the animaculus, if they were talking about animals. Nicholas Malebranche was one of the defenders of this theory, also called encapsulated preformation. The trouble is, this theory had to accept that the germ cells of said homunculus had to contain other homunculi, and so on, so that all possible descendants of any human being were already contained in his first ancestor, like a Russian doll extended to infinity.
•         On the opposite side was the theory of pangenesis, according to which the generative power would be distributed throughout the body, from where it would move to the germ cells, and on getting together, a new being would be generated, thus avoiding the infinite Russian doll.
•         On the other hand, the theory of preformation was divided into three independent branches: those that held that all generative power is concentrated in the masculine elements of sperm (spermism, defended for instance by van Leeuwenhoek); those who said that everything is in the ovule (ovism, among whose defenders were such distinguished names as Marcello Malpighi and Lazzaro Spallanzani); and a third (minority) group that argued that the origin of every new being is in the zygote.
During the eighteenth century, with the advent of better microscopes, the balance once again tilted towards the theory of epigenesis, thanks to the works of biologists Caspar Friedrich Wolff and Johann Friedrich Blumenbach, and the philosopher Emmanuel Kant in his Critique of Judgement. In particular, Blumenbach proposed that there is a special force, which he called Bildungstrieb (formative force), similar to Newton’s gravitation, which would regulate the order of appearance and distribution of the parts and organs of embryos during their development. Although Blumenbach argued that this force is purely physical, it is easy to see that the theory of epigenesis lead easily to the proposal of a vital force or analogous entities. This lead to its once again falling into decline.
The reader must not believe that the advance of the life sciences during the nineteenth and twentieth centuries led to a final solution of the problem in favor of one of the two main alternatives. But that part of the story will be handled in the next post.

The same post in Spanish
Thematic thread on Evolution: Preceding Next

Manuel Alfonseca
First post in a series of four