Is there a universe? 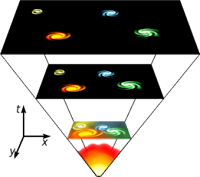 The Spanish Wikipedia defines the universe thus:
The universe is the totality of space and time, all forms of matter, energy and momentum, plus the laws and physical constants that govern them. However, this term is also used in slightly different contextual senses and refers to concepts such as cosmos, world or nature. Its study, at the highest scales, is the object of cosmology, a discipline based on astronomy and physics, which describes all the aspects of this universe, together with its phenomena.
Before applying to the universe, the Greek word cosmos meant order and beauty. Notice that this sense is maintained in one of its derivatives, the word cosmetic. The Latin word mundus also has the two meanings: as a noun, it means the world, the totality. As an adjective, clean, neat, elegant. Presumably the first sense was copied from Greece, and to translate the world cosmos they adopted the same word that represented in Latin its other meaning. Finally the word nature (physis in Greek) has phenomenal connotations (rather than to the universe, it refers to what happens in it). From this word come physics (the study of nature) and metaphysics (beyond physics).
First generation civilizations (especially those of Mesopotamia and Egypt) did not have the concept of universe. When they wanted to express the totality, they did so by enumerating its parts: the sky, meteorological phenomena (the region of the air), the waters, the earth and the underground. Or they simply said (as in the first chapter of Genesis) the heavens and the earth. With the word cosmos, the Greeks were the first to designate with a single term the totality of what exists. But for some time the following question had no answer: does this term really have a referent, or does it play the role of a hodgepodge, a mishmash of unrelated objects?

Traditionally it is said that Plato’s Timaeus is the earliest treatise on cosmology, for it describes the cosmos, as opposed to the earlier cosmogonies, which are interested only in its origin. Let’s look at a curious quotation from Timaeus:
The cosmos is, in fact, the most beautiful thing that has been made and its creator the best of causes. The universe thus generated has been formed according to the model of reason, wisdom and immutable essence, from which it follows as a necessary consequence that the universe is a copy.
A few centuries later, Ptolemy proposed his model of the universe, which was used over a thousand years. In this model, as in Plato, the cosmos is a physical object whose existence is not questioned. Newton’s universe is also a coherent whole, a physical object with an absolute space and time, whose behavior can be described completely thanks to the theory of universal gravitation.
Starting from the nineteenth century, the existence of the universe begins to be doubted. The question arose as a reaction to the following syllogism:
Every physical object has a cause.
The universe is a physical object.
Therefore the universe has a cause.
This argument can be reduced to the second proof of the existence of God by Thomas Aquinas. Of course, atheistic thinkers of the nineteenth century could not accept this reasoning, and as they did not dare to deny the principle of causality (the major premise of the syllogism), they attacked the minor premise by denying the existence of the universe as a physical object. What would then be the universe? A simple word without a reference, a term designating the set of all things, but that set would not exist, only things would exist. Thus, the previous syllogism would be replaced by the following:
Every physical object has a cause.
The universe is not a physical object.
Therefore the universe does not need a cause.
By 1915, when Einstein presented the General Relativity theory, he formulated a cosmological equation that, as its name indicates, applies to the whole universe. This is one of its forms:

But the existence of this equation implies that the universe must be a physical object, which means that the minor premise of the first syllogism must be true, contrary to what the nineteenth-century atheists thought. Consequently, atheism has been forced to deny the major premise, the principle of causality. Hence statements like the following:
Although the universe is a physical object, it may have arisen without a cause, as a quantum fluctuation of the void.
To assert this, atheistic physicists rely on a consequence of Heisenberg's uncertainty principle, which in one of its forms can be expressed as follows:
DE.Dt≥ħ/2
This means that an object with energy DE can appear spontaneously from the vacuum during a time Dt<ħ/(2DE). These objects are called virtual particles, and would last for a ridiculously small time. A virtual electron, for example, would last about 1.3×10-21 seconds (just above one septillionth of a second). And the more energy the virtual particle has, the less time it will last. Due to their short duration, the existence of virtual particles has not been proved.
If the universe (which is already 13.8 billion years old) can be a quantum fluctuation, its energy must be zero. Therefore, since the universe contains an enormous amount of matter and radiation, the atheistic physicists are trying to find something that can compensate it somehow. Some say that perhaps dark energy (which we do not know what it is, assuming that it is something) will turn out to be a negative energy, and perhaps its value will exactly compensate for all the matter and the energy that we do know does exist, so that the total energy of the universe will turn out to be zero, because otherwise their whole reasoning would break down.


This lucubration they call science.