In 1976, at the peak of the pessimistic forecasts about the catastrophic rise in global population, foreseen by the first report of the Club of Rome (1972), Isaac Asimov published a science fiction short story (The winnowing), which suggested a (highly unethical) way to stop this catastrophic increase in population. This is the summary of the story:
In 2005, the unstoppable population growth causes famine in the third world countries. To contain it, the world authorities (the UN), controlled by the developed world, decide to apply a triage to the world population. To do this, a scientist (who does not want to do it, but is threatened with reprisals against his family) is ordered to develop a protein, poisonous for 70% of the population, but harmless for the remainder, depending on each individual DNA, so that its effects will be dramatic, but random. The protein will be introduced in the food sent to alleviate famines, so as to bring the world population down to more manageable levels. The project is not applied exactly as planned, because the biologist who must develop the protein gives it to eat to the world leaders without their knowing, so that 70% of them will die. As the protein has been adapted to the scientist’s DNA, by eating it he commits suicide, thus escaping the consequences of what he has done. 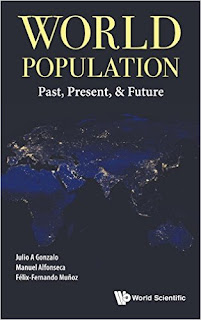 Forty years after the publication of Asimov’s story, things do not look so pessimistic. See a previous article in this blog and the book Word Population: Past, Present and Future, which collects several papers on the subject by myself, Julio A. Gonzalo and Félix-Fernando Muñoz. However, the United Nations, dominated by First World countries (the United States and the European Union) appear to be in the middle of a conspiracy to reduce the world's population, not too different from Asimov’s story, although using means less clumsy. These means act simultaneously on the two variables that influence the global population (birth and death rates). They are the following:

As the Catholic Church remains firm in the defense of human dignity and human rights, and openly opposes these three measures, it has become the enemy to be beaten. If this worldwide conspiracy were to prevail, there would probably be a global persecution against Catholics who remain faithful to their Church and are not won over by the dominant ideology. It would not surprise me if being a Catholic may one day become a sufficient reason for the application of euthanasia, as predicted by Robert Hugh Benson in his novel Lord of the World (1907).
So far, despite the continuing efforts of the First World countries, they have failed to impose their agenda, thanks to the opposition of Muslim and African countries, and Russia. But permanent pressure is starting to make effect, and there are worrying signs that they may win, in a more or less near future.

The same post in Spanish
Thematic Thread on Politics and Economy: Previous Next