The problem of Achilles and the tortoise


Suppose, for instance, that Achilles runs at twice the speed of the tortoise. We will use, as the unit of time, the time needed by Achilles to reach point A. Then the time series in Zeno’s reasoning is 1, 1/2, 1/4, 1/8, 1/16..., whose sum is 2. In other words, Achilles catches the tortoise in double the time he needs to reach the point where the tortoise was, when he started running. 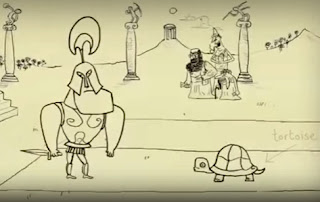 Although the problem of Achilles and the tortoise collides too much with common sense for anyone to take it seriously, for over two millennia it remained in the subconscious of philosophers and mathematicians as an unsolved problem, until the development of the theory of numerical series in the nineteenth century made it possible to consider it closed. This proved that Zeno’s theory regarding the inexistence and the impossibility of movement was based on a demonstrably false hypothesis, so his theory finally fell.
This is not always the case with philosophical theories: it is often very difficult to tear them down permanently, because the false premises on which they are based are well hidden and very difficult to refute. But the example of Zeno's theory should make us wary to see that philosophical theories are not all equal: some are demonstrably false; others are probably false, although their falsity has not yet been proved; and others may be true, or at least truer than others.
Consider the materialistic philosophy, which asserts that only matter exists. Why is it so popular, when it has been proved that it leads to numerous contradictions, a few of which I listed in another post in this blog?
Probably because there are many people, philosophers or not, who ardently wish that this theory be true, because by denying human freedom and reducing it to determinism or randomness, it eliminates the concept of good and evil, and therefore sin and responsibility. This is the reason why some modern psychologists and psychiatrists tell their prospective clients:


Do you have regrets? Come to my office and I will take them away.

The same post in Spanish
Thematic Thread on Mathematics: Previous Next
Manuel Alfonseca