Scientific mistakes in Planet of the Apes 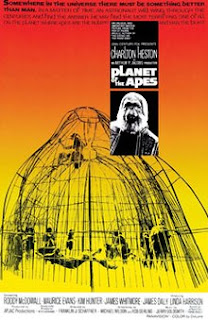 In 1963, the French writer Pierre Boulle published a famous science-fiction novel titled Planet of the Apes, which was adapted to the cinema for the first time in 1968, with Charlton Heston as the protagonist and script by Michael Wilson and Rod Serling, the latter famous for the TV series The Twilight Zone. A decade earlier, Boulle had published another bestseller, also successfully adapted to the movies: The Bridge over the River Kwai.
Boulle’s novel tells the story of three astronauts embarking on a two-year journey (measured in relativistic time) to a planet revolving around Betelgeuse (alpha of the Orion constellation) and find there an extraterrestrial civilization at a level similar to ours in the mid-twentieth century, where intelligent beings are three species of apes (identical to the terrestrial gorillas, chimpanzees and orangutans) while human beings (also identical to us) are devoid of reason. Of course, the only surviving terrestrial astronaut finds it very difficult to convince the apes that he is an intelligent being.

The film is relatively faithful to the original, except that the astronauts have made a journey of three thousand years in hibernation, plus a completely different final dramatic effect: the planet where they have arrived turns out to be the Earth, where a nuclear war has wiped out our civilization, reducing surviving humans to the wild, while the anthropoid apes have evolved into the new dominant intelligent species. Serling probably took this idea, having the astronauts return to the Earth without knowing it, from the chapter I shot an arrow into the air, from the first season of The Twilight Zone.

Both the novel and the film contain important scientific mistakes, which I will now comment:
But suppose that, instead of Betelgeuse, which was a bad choice, Pierre Boulle had selected another red giant with a mass similar to the sun, which would have remained billions of years in the main sequence before becoming a red giant. Would a situation like that presented in the novel have been possible there? Let us look at several possibilities:

1.        Intelligent life could have arisen in a planet around that star during the first phase of its evolution, while it was in the main sequence. The planet would have been located in the initial habitability area of ​​the star. In that case, when it became a red giant, its size would have increased disproportionately, that planet would have been absorbed by the star, and its civilization would have been destroyed.
2.        Intelligent life could have arisen on a planet located in the new habitable zone of the star, after its transformation into a red giant. This case can be considered impossible. There would be no time for intelligent beings to appear, for red giants of the size of the sun remain in this state for a short number of million years, while billions of years are needed for intelligence to appear – assuming that we can give statistical value to the only case we know, life on Earth.

3.    Intelligent life could have emerged on a planet located in the first habitable zone. That civilization would have reached the technological level necessary for interplanetary travel. When they detected that their star was about to become a red giant, they would have moved to another planet located in the new habitability zone. In such case, the fact that this civilization lost its technological capacity must be explained. At the time of the novel, it had receded to the same level of our mid-twentieth century, prior to space travel. The novel does not mention this. It is obvious that Boulle did not know, or if he knew, he did not care.


4.        Finally, the evolution described by the novel is hardly plausible. It is extremely unlikely that a parallel evolution carried out on another planet would result in four species identical to the corresponding terrestrial species, all four of which would have become intelligent, while one (humans) had later lost its intelligence, as the novel states, without its leaving trace in the physical aspect of the four species (the form of the head, or the presence or absence of corporal hair).
Apart from this, the novel criticizes correctly certain experiments performed with great apes (the apes make them with human beings) and raises interesting problems, such as the difficulty of coming to an understanding with extraterrestrial beings. It deserves the fame it has reached through its adaptations to the cinema.

The same post in Spanish
Thematic Thread on Literature and Cinema: Previous Next