Identical twins arise when a zygote (a fertilized egg) begins to divide. About five days after fertilization, it reaches the blastula stage and is implanted in the uterus, but for unclear reasons it can be broken into two separate parts, which will result in two independent embryos that may or not share the same placenta, although they usually have a different amniotic sac. The two siblings who are born share the same genetic endowment (the same DNA), except for possible post-separation mutations.
In contrast, two non-identical twins arise when two distinct eggs are fertilized, each by one spermatozoid, forming two different blastulas, each of which is implanted in the uterus through a placenta of its own. The two brothers will have different genetic endowments, similar to those of two non-twin brothers, because they come from different gametes.
But there is a third possibility: a chimera arises when two blastulas that would normally give rise to two non-identical twins merge before being implanted in the uterus and give rise to a single embryo and, consequently, to a single individual possessing, in different cells, two different genetic endowments. Thus, it may happen that a chimeric individual has (for example) the liver with a genetic endowment and the kidneys with another. Typically, chimeras are difficult to detect, unless (for example) just one of the blastulas would have given rise to an albino, in which case the resulting chimeric individual may have unequally pigmented skin. Even in this case, the cause could be different. It could also happen (although it is very rare) that one of the two zygotes is male (with X and Y chromosomes) and the other female (with XX chromosomes), in which case part of the cells of the chimera would be male and another part female.


A chimera can also be formed when a blastula spontaneously absorbs a few cells detached from another living being, either the mother, or one of the siblings sharing the maternal uterus. In this case we speak of micro-chimeras, because the number of cells with different genetic endowment is unbalanced, as one of the two genetic endowments will be much more frequent than the other.
The frequency of chimeras depends on the species. Thus, for example, in marmosets 95% of the individuals are chimeras, although this number also includes micro-chimeras. 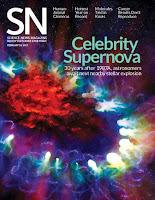 The Feb. 18th 2017 issue of Science News contains a story titled Human-animal chimeras created (this is the title in the paper magazine; in the web it is different). What has been done? Incorporate human stem cells into embryos of pigs and cattle, with the long-term intention of building living beings with a human liver or heart, thus providing material for transplants. For the time being, the results of the experiment have not been very convincing: of 2075 pig embryos injected with human stem cells, just 186 survived throughout the experiment, and of these, just 67 had incorporated human cells. In addition, the chimeric embryos were underdeveloped, which seems to indicate that the injection of human cells had interfered negatively in their development.
But these are temporary technical limitations, which will surely be solved in the future. The real issue is that such experiments pose important ethical problems. For example, if the human stem cells are not well controlled, we could end up creating a pig with a human brain, or a sow with human ovaries, that if fertilized with human semen, would give birth to a baby of our species. Are we willing to let this research lead to such results?
In some countries, research with chimeras made up of human cells mixed with animals is prohibited. In the United States, using federal funds is forbidden, but private or state funding is permitted.
Faced with this situation, Françoise Baylis, an expert on bioethics at Dalhousie University in Halifax, Canada, believes that research on human-animal chimeras will eventually be banned because of the faulty assumption that human life is more valuable than that of non-human beings.is And he adds this:
The hope that one can ‘forever’ avoid the tough ethical questions by simply ensuring that the nonhuman animals are not ‘substantively humanized’ is flawed (short-sighted),”
In other words, this bioethicist regrets that these investigations may be impeded, because human life is not, according to him, more valuable than (for example) that of a cockroach. And yet I don’t think that any biologist will deny that the human brain is the most complex object in the universe (as far as we know, leaving aside the possible existence of extraterrestrial life). Baylis therefore merely repeats without argument the supreme dogma of materialistic biology:
All species of living beings are equivalent, none is superior to others.


This dogma is clearly anti-scientific, because it relies exclusively on ideology and refuses to take into account the abundant scientific evidence that man is a species different and superior to all others, evidence that I summarized in the most read article in my blog: Is man just an animal?

The same post in Spanish
Thematic thread on Evolution: Preceding Next
Manuel Alfonseca