The mystery of too many variables

We have now two great physical theories:
·         On one side, quantum mechanics, which applies primarily to very small objects (those scarcely affected by gravity), and is the basic tool for the standard theory of particle physics.
·         On the other, general relativity, which applies to very large objects (from the planets to the whole universe, those for which almost nothing matters except gravity), and is the main tool for the standard cosmological (Big Bang) theory.
Unfortunately, the two theories are not mutually compatible, so that physics is far from having resolved its outstanding issues. Moreover, these two theories depend on about forty independent variables. Many physicists think that they are too many. If it were true, it would mean that the configuration space of nature has about forty dimensions. If it is difficult to imagine a four-dimensional space, what about forty! 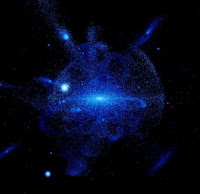 Man has an irresistible tendency to assume that nature must be very simple. The resistance of physicists to accept forty independent variables is thus quite understandable. Many of them hope that, as science progresses and new things are discovered, the number of those variables will decrease. A few think that in the end their number will be reduced to zero. That would mean that we live in the only possible universe. All those multiverse theories out there (six at least, incompatible with one another) would disappear automatically. But this hypothesis is far from confirmed.
In the worst case, many physicists would be happy if the number of independent variables could be reduced to one. In that case there could be a very large number, perhaps infinite, of universes, but a hypothetical Creator would have needed just a single joystick moving, for instance, from right to left (or from left to right), to choose which of the possible universes He wanted to create.
This tendency towards simplification applies to all fields of human research. Consider, for example, history, the study of human activities over time. In the last two centuries there have been numerous attempts to explain the course of history in relation to a single independent variable. Let us look at a few of them:
·         Karl Marx, one of the most influential men in recent times, based his theory (dialectical materialism) on the assumption that history can be explained perfectly in terms of a single independent variable: economy. He not only explained history, he also predicted (wrongly) its future development.
·         For Max Weber, who published his main work in the early twentieth century, the only independent variable is religion. The differences between Protestantism and Catholicism would explain the economic development of the West during the last five centuries.
·         For the Fabian Society, among whose main representatives were the writers H.G. Wells and George Bernard Shaw, and who based themselves directly or indirectly on Darwin’s theory of evolution and the philosophies of Spencer and Nietzsche, human history depends only on natural selection, that would lead inexorably from animal to man, and from man to the superman. A branch of this set of theories led to the doctrine of the supremacy of the Aryan race, that dominated in Germany during Hitler’s government. A more recent form of these ideas is transhumanism (or humanism+), led by Nick Bostrom, the Oxford philosopher.
·         For Isaac Asimov, whom I have mentioned several times in these posts, the only independent variable needed to explain human history is technology. In a series of 14 volumes he attempted to explain history in the light of the progressive technological advances that came to happen.
Clearly, all these theories cannot be true at the same time, for they contradict one another. Also there is a much more important question: why should nature, or history, or whatever, be explained by a single independent variable? In math we are used to working with functions of many variables. It is true that the greater the number of these, the more difficult to represent them. But I do not see why we should strive to deny the existence of such variables. If we had accepted that the world is more complicated than we would like, perhaps he might have avoided some of the suffering in the twentieth century.

The same post in Spanish
Thematic Thread on Statistics: Previous Next