The monkey pounding on a typewriter 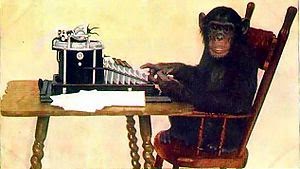 In connection with the fine tuning problem, the argument of the typist monkey is often used as an illustration that even very unlikely events can occur spontaneously. Depending on the author of the quote, the text supposedly written by the monkey can be the complete works of Shakespeare, Don Quixote, or even a shorter and less specific work. For instance, John Leslie, in his book Universes (Chapter One), writes:
Our universe can indeed look as if designed. In reality, though,  it may be merely the sort of thing to be expected sooner or later. Given sufficient many years with a typewriter, even a monkey would produce a sonnet.

Really? ¿A sufficient number of years? How many? Have you tried to calculate it?

Let us simplify the problem. We are going to ask the monkey to type, by pounding randomly the keys of the typewriter, something much shorter than a work by Shakespeare, or even a sonnet. We will just ask for the first sentence in Don Quixote:
En un lugar de la Mancha, de cuyo nombre no quiero acordarme, no ha mucho tiempo que vivía un hidalgo de los de lanza en astillero, adarga antigua, rocín flaco y galgo corredor.
We assume further that the typewriter has only the minimum number of keys: 27 letters, comma, period and blank space. To simplify even more, we accept a text written in lower case. Can we estimate how long it would take the monkey to write this text, by pounding the keys at random?
Let's see. The probability that a certain text of 177 characters is generated by banging randomly on 30 keys (we assume that the probability of the monkey pressing any key is the same) is 30-177»3.5´10-262.
Assume that the monkey is able to type 177 characters per minute. In that case, what he produces every minute can be considered an attempt to reproduce the first sentence of Don Quixote. Assuming (a big assumption) that no text is repeated, that all the attempts are different, how long would be needed to produce all the possible variations of the characters in the indicated text, one of which is this piece of Don Quixote? It is easy to see that it would take 2.8´10261 minutes (the inverse of the number of variations), equivalent to about 5.3´10255 years, i.e., 3.8´10245 times the age of the universe (a 3 and an 8 followed by 244 zeros).
The conclusion is obvious: however many years we left the monkey with the typewriter, it is not reasonable to think that it would be able to type that small piece of Don Quixote, as it would die much earlier. In fact, if we force the poor monkey to pound all the time on the typewriter, with no time to eat or sleep, its life expectancy will be dramatically reduced.
Yes, I know, the monkey is metaphorical, and the objective of the problem is to show that, given enough time, however long, even extremely improbable events may happen (those with a very small probability, greater than zero). But look at the question from the opposite side. If we find the text quoted above, which of the following two hypotheses should be considered more rational?
•         That the text was written by a person with a certain intention.


•         Or that the text arose by chance, as though it had been produced by a monkey pounding on a typewriter.

The same post in Spanish
Thematic thread on Multiverse and Fine Tuning: Preceding Next
Thematic Thread on Statistics: Previous Next
Manuel Alfonseca
(For Fonch)