Neurons and free will 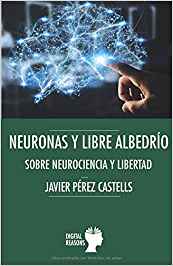 In another post in this blog I have described the four theories used by philosophers to try and solve the problem of human mind: What is intelligence? What is consciousness? What is free will? Are we actually free, or are we determined, just like meat machines?
At the end of last year, Javier Pérez Castells published a book where he addresses some of these issues from a scientific and philosophical point of view. Its title (in Spanish) is the same as the title of this post. In particular, chapter 8 of the book describes some of the models with which various scientists and philosophers have tried to explain how we make decisions more complex than those studied by the experiments performed by Libet, Fried and Haynes, which don’t go much further that pressing a button or raising a hand. These models are called two-stage, because they try to explain our decisions assuming that they are made in two phases: the first, more or less random, in which the brain generates the available alternatives, followed by a second phase, when we actually make a decision, after weighing those alternatives.


Two-stage models date back from the late nineteenth century. The first one was proposed by the American philosopher William James in 1884. In 1906, the French mathematician Henri Poincaré proposed another. Soon after, quantum mechanics and its intrinsically random interpretations introduced possible mechanisms that could act during the first phase of the process. In the last decades, several of these models have been developed. Let us look at a few.
Note that most of the previous theories are due to philosophers, rather than neuroscientists. This is understandable, because this question is more philosophical than scientific, and contradicts the idea, spread by the media and some popular books, that neuroscience has shown, or is about to prove, that we are meat machines, determined by our neurons, and that human freedom is just a delusion. Note also that the authors of the models distribute evenly among the underlying philosophical theories alluded to, at the beginning of this post.


Thematic thread on Natural and Artificial Intelligence: Preceding Next