The mystery of the Great Pyramid 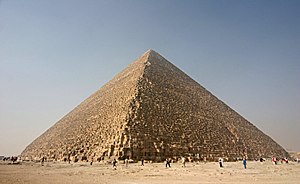 The Great Pyramid of Giza, also called Pyramid of Cheops or Pyramid of Jufu, was built to be the tomb of the pharaoh Jufu (called by the Greeks Cheops), of the fourth dynasty, the high point of the Ancient Egyptian Empire. The reign of Jufu is usually dated in the 26th century before Christ, over 4500 years ago.
The current height of the Great Pyramid is 138.8 meters, but the pyramid is truncated, having lost its top. It is easy to calculate that its original height was about 8 meters higher: 146.7 meters, or 280 Egyptian cubits. The base of the pyramid is a square with a side of 230.34 meters, or 440 Egyptian cubits.
Observe a curious point: the semi-perimeter of the pyramid (twice the side of the base) is equal to 880 cubits. If we divide it by the height of the pyramid, we get the following:
(880/220) = (22/7) = 3.142857...
This is a fairly good approximation of the value of p, supposedly unknown until many centuries later, when it was discovered by Archimedes. In fact, it is much better than that of the Rhind papyrus, which we know was later by about seven hundred years, an approximation I mentioned in the previous post. What can we deduce from it? There are at least four possibilities:

The first explanation is not very credible. Technical knowledge is not usually lost so easily, unless it is quite complex. As I explained in another article in this blog, during the European Middle Ages (which some call the Dark Age), not only the technical advances of the Romans were not lost, but others were added, such as water and wind mills, the iron plow, the harness and the stirrup, the chimney, the buttress, and the mechanical clock. It seems unlikely that a piece of information as simple as fraction 22/7 would be forgotten by architects during millennia.
The second explanation does not seem reasonable. It would be, if in the Great Pyramid the quotient between the semi-perimeter and the height would have been 3.1, for instance; but exactly 22/7 seems too coincidental. 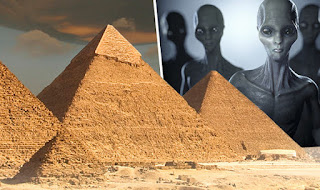 What can we say about the third explanation? Among other things, that these aliens are too simple. If they wanted to bequeath us a good approximation of p, why settle for 22/7? Why not use a much better one? If they were smart enough to make interstellar travel, they would know the value of pi with several trillion digits, like us. Why leave it at just three?

Given this situation, most researchers have opted for the fourth alternative (some other explanation). Yes, but which one? Two have been proposed, which seem reasonable: 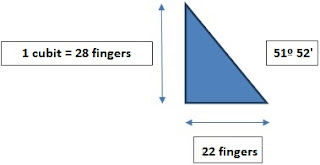 Assume explanation 4a) is the right one: the use of wheels with a diameter of one cubit. If this is not what happened, it could have happened, and that is what matters in this reasoning. By using this method of measurement, the value of p would have automatically entered in the dimensions of the pyramid, even though the Egyptians of that time might not even know about the existence of p. In such a case, can we assert that p is just a creation of human mind? Perhaps this mental experiment indicates that the value of p was not invented, but discovered, that it existed before any human being noticed its existence.

The same post in Spanish
Thematic Thread on Mathematics: Previous Next