The celebration of Christmas

The time of the winter solstice was the occasion for major celebrations by nearly all ancient peoples. It represents the time when the sun, after losing height for six months, begins again to recover its upward movement. The ancients had always the fear that some year the sun could fail to recover, and would continue down until disappearing forever, a catastrophe for humanity.
In the Roman Empire, the Saturnalia played that role, for Saturn was the god of agriculture and the recovery of the sun was a sine qua non for the success of the next harvest. Also, just by that time the sun entered the sign of Capricorn in the zodiac, which was astrologically linked with the planet Saturn. The festival, which began on December 17, lasted for several days, until the 23rd. During these days, banquets were held, gifts were distributed, and masters served their slaves.
One of the traditional deities of ancient Indo-European peoples, Mitra, had a varied fate, according to the particular people we are talking about. Thus, in Vedic India he was one of the chief gods, along with Varuna and the other asuras, but came to play a secondary role, almost demonic, when in Hindu India prevailed the devas, another group of gods including Siva and Vishnu.


Mitra, also spelled Mithra, played an important role in the early Persian religion. When Zoroaster introduced a new religion, Mazdeism, and eliminated most of the old gods, he (or his successors) decided to keep Mithra, who was ranked among the ahuras, a word clearly akin to the Vedic asura. The ahuras were divine beings, or at least angelic. One of them was the supreme God, Ahura Mazda, who gives name to this religion. 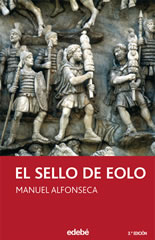 In the Indo-European religions of southern Europe, the Greek and the Roman mythologies, the god Mitra had disappeared. Although the Parthian and the Persians were the traditional enemies of the Roman Empire, the cult of Mitra was imported in Rome, where he became the supreme God of a solar religion, Mithraism, whose cult spread throughout the Roman army, but rather less in civil society. In one of my novels (El sello de Eolo, The seal of Aeolus) the conflict between Mithraism and Christianity under emperor Marcus Aurelius plays a role.
To meet the increasing spread of Christianity in the empire, in 274 the Roman emperor Aurelian tried to encourage Mithraism. As this divinity had a solar character, he instituted its most important festivity on December 25, which was near the winter solstice, the day of the triumph of the sun. The feast was called Dies Natalis Solis Invicti, the birthday of the unconquerable sun.
For some time it was assumed that, after the triumph of Christianity, the Catholic Church tried to Christianize the pagan festivities by placing the Christian celebrations on the same dates. According to this theory, the date of December 25 for Christmas would have been chosen to compete with the day of the unconquerable sun, or at least with the winter solstice festivities. Isaac Newton was one of the proponents of this theory.
The Gospels do not say anything about the date of the birth of Jesus. However, a very ancient tradition, dating back to Irenaeus (second century A.D.) placed the date of the Incarnation in the spring equinox (March 25 on the Roman calendar of the time, the first day of the year in the traditional Republican calendar in Rome), so that the birth would have occurred nine months later (by December 25).
A recent theory, based on the existing literature, suggests that the celebration of Christmas is older than previously thought. According to this theory, the date of Christmas was not chosen to compete with Aurelian’s feast of the unconquerable sun, but just the opposite: the emperor would have chosen that date to compete with a much older Christian celebration.
What is the truth? As this is a historical, not a scientific fact, it is not possible to solve the problem using deduction or induction, we must resort to abduction, and we have seen in another article that this method of reasoning provides less certainty than the other two, although in some cases the accumulation of documents can become convincing. In this case we do not have enough documents to reach a final conclusion.

The same post in Spanish
Thematic Thread on Science and Religion: Next