Dostoyevsky and the function of one variable

In his novel The devils (or The possessed, for there are two versions of the title), published in 1872, Dostoyevsky appears as a political prophet who displays a surprising knowledge of Communism and communists. In this book, 45 years before the fact, he predicted correctly that Russia would be the first country where Communism would win, an idea disregarded by Marx and Engels due to the lack of an industrial proletariat in that country. Let us listen to one of the characters in the novel:
We know that a mysterious finger is pointing to our delightful country as the land most fitted to accomplish the great task.
The communists in the book, the possessed, or the devils, have the same aims as their counterparts who triumphed in the Soviet Union, such as the elimination of religion. To reach their objectives, they propose two different procedures. Let us look at the words that Dostoyevsky puts in their mouths:


He suggests as a final solution of the question the division of mankind into two unequal parts. One-tenth enjoys absolute liberty and unbounded power over the other nine-tenths. The others have to give up all individuality and become, so to speak, a herd, and, through boundless submission, will by a series of regenerations attain primaeval innocence, something like the Garden of Eden.
It's urged that, however much you tinker with the world, you can't make a good job of it, but that by cutting off a hundred million heads and so lightening one's burden, one can jump over the ditch more safely.
Dostoyevsky makes his possessed choose between both methods. In fact, in the Soviet Union they chose to apply both. Since 1919 the Communist Party established a limitation to the number of its members, than never went beyond 4,200,000. As the members had many privileges, there were not enough for everybody. Compared to the 190,000,000 citizens of the Soviet Union, the proportion (2.2%) was even less than what Dostoyevsky had foreseen (10%). Later, the Stalin purges applied the second procedure, causing the death of about 30 million people.
Communists are usually classified as the extreme left. The classification of political ideas into right and left is an example of that irresistible trend to reduce all phenomena to functions of one variable I mentioned in a previous article, because these functions are simpler and can be represented without difficulty. But reality is often stubborn and belies these illusions, because the world is more complex than we think and many phenomena depend on more than one independent variable.
When classifying human beings according to their political ideas, we often speak of "right", "left" and "center". Here are some inklings that this classification oversimplifies:
Reason and ideology are confronted, for the second is irrational (it usually means a blind attachment to certain ideas). A scientist should be neither left nor right. Every particular political issue should be studied carefully to adopt one’s own position, without giving a damn that you are classified here or there. If you do this, some of your ideas will be the same as those at one side, some with those at the other.
There has been one attempt (The Political Compass) to classify political ideas based on two independent variables rather than one, as is usually done: 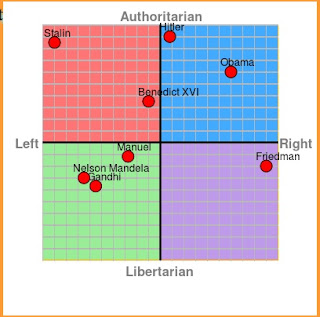 In this two-dimensional analysis, Hitler and Stalin appear closer than usual, while Benedict XVI falls near the center of the diagram, so that the mere fact of working with two independent variables instead of one apparently eliminates a few of the drawbacks mentioned when a single variable is used.
In 2005 I took for the first time the test of The Political Compass, to see where I stood. In 2015 I have just repeated it, to see if their first diagnosis was confirmed, or if in the meantime I had changed position. The results of the two tests were fully consistent: (-3, -0.97) in 2005, (-2.75, -1.18) in 2015 (the range is from -10 to 10 in both axes). This means that I am quite near the center, slightly towards the libertarian social area, and a little more towards the economic left, despite the fact that the test also asked my opinion on abortion. Among those whose approximate position is provided in the website, the closest to mine happen to be Nelson Mandela, Gandhi and Benedict XVI. And among famous composers, Beethoven and Mahler. I don’t  think I am in bad company.
It is likely that the mindset of a person is not a function of just two independent variables, it probably depends on more factors. Anyway, as a first attempt, this work by The Political Compass seems quite commendable.