What's the use of a child?

The importance of basic research 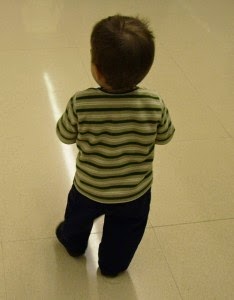 The secretary of the Royal Society of Sciences stood up and said:
“Mr. Faraday has the floor.”
“In today’s lecture, rather than speaking about a scientific subject, I’ll perform an experiment before your eyes. But first, allow me a short historical introduction. As you know, Oersted, Ampère and Arago proved that an electric current can give rise to magnetic phenomena. If you set a magnetic needle near an inactive copper wire, the needle points North. If a current passes through the wire, the needle deflects. If the wire is coiled and a current goes through it, the coil behaves as a magnet with two poles, North and South, the same as a typical ordinary magnet.

I had the following idea: if an electric current generates magnetic effects, can the opposite also happen? Will a magnet generate electric effects? I have devised the following experiment. This is a coil of copper wire. I now connect its two ends to this galvanometer, which measures electric current. The galvanometer is so large, that you will be able to see any movement of the needle, even if you are sitting in the last row. Do you see the needle moving? Of course not! The circuit of the coil does not include a battery. There is no current.
Now look carefully. I now set this natural magnet here, and with this crank move the coil around the magnet. Watch the galvanometer! The needle moved around twice while I was turning the coil twice around the magnet. The needle of the galvanometer moves when there is a current in the circuit, therefore the simple fact of moving a coil in a magnetic field generates a current in the wire. Oersted proved that an electric current can have magnetic effects. I have proved that magnetism can also generate electricity.
Thanks for your attention.”
The secretary of the Royal Society of Sciences stood up and said:
“The lecture is ended. Is there anyone who wishes to ask a question?”
A well-dressed gentleman with grey hair stood up and said:
“Mr. Faraday, your experiment was very interesting, but what is its use?”
Faraday answered with another question:
“What's the use of a child?”
“I don’t understand”
“Children are cared for, even though they don’t return immediate profits to society. One day, when they are adults, they’ll help build a world where we can live. A few will be geniuses and benefactors of humanity. My experiment is similar. Perhaps just now we can’t see an immediate application, but who can tell if, in a few decades, perhaps in a century, it will give rise to a revolutionary application that will change our way of life? We must not waste any basic knowledge, even though it looks useless. Everything can find applications in the future.”
The gentleman shook his head skeptically and sat down without following the discussion.

Faraday, however, was right. Thirty five years after his lecture, Werner von Siemens applied his experiment to build the first high voltage industrial generator of electricity. We have now in our homes and factories lots of electric current which moves electro domestic devices and gives us light at night, so that we cannot imagine life without abundant electricity. Michel Faraday’s child has turned into an adult.